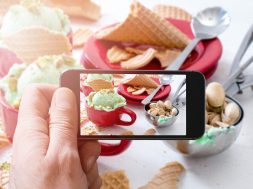 …at the moment. I, like so many of us, am subject to change.

What do I scroll through just before bed? Instagram. Where’s the first place I think of to share my little snaps of everyday life? Instagram. What do I use to nosey into other people’s lives? No not Facebook… yes you’ve guessed it. Instagram.

For the time being Instagram has cemented itself on top of the social media pile for me, even above social media favourites Facebook, Twitter and filter fun SnapChat (getting there but I’m not quite ‘down’ with the snaps just yet).

On to the reasons then, in no particular order…

I bet you thought the first one would be more interesting didn’t you?

It seems so obvious but the biggest selling point of Instagram is that it is image centric. You can scroll for hours through 1000’s of images and most of the time not read an entire post from someone. It’s like being a child, picking up the book and preferring the beautiful illustrations to the written words. It sparks imagination. Where are they? What are they doing? Why this picture? Why this moment? How did they take such a wonderful shot? What’s going on in their lives that made them share that? So many questions and a lot of the time no answers. Most people don’t share lengthy captions with their uploads. That is not to say that I don’t ever read the accompanying caption, I do, especially on select accounts. Most of the time though, I just prefer the mystery. Instagram for me is taking a peek into a person’s photo album or keepsake box, sometimes insignificant and sometimes poignant but always beautiful.

I am the #hashtag #queen.

Seriously, ask anyone. I’ve even heard people exclaim ‘All the hashtags!’ after seeing one of my #posts. I am what some might call a #HashtagAddict. I’m also one of those #annoying people that has to use capital #letters when using more than one #word in a hashtag. Don’t you think it makes it easier to #read? I #love that you can use more hashtags on #Instagram as it expands the reach of your beloved #photos. I love that there are #groups of hashtags for particular #obsessions such as #books, #fitness, #food etc and that by using these hashtags you are opened up to a wide #world of other obsessives just like #you. I love that you can see how many other #people are posting about a particular #topic (or how many other posts there are even, we don’t just use a hashtag just once do we? #Hell no). You can see what is #popular just by typing a few #letters. Unlike #Twitter (unless it’s #trending) you have a better #idea whether or not the hashtag/s you have used are going to be searched for and therefore whether members of your #future #tribe will see your #instapic. There’s also a trick of concealing your hashtags within a comment, so it doesn’t look like you’ve used that many! Had this been an Instagram post I would have nearly maxed out on the 30 hashtag limit (why do you restrict us so!) so I’ll move on. In summary, I love hashtags.

The old fashioned way of doing this of course was to peak out of the window and spy on your neighbours whilst trying to conceal yourself behind a curtain. Stop doing that. You are not a magician. You are not going to disappear. They are going to see you or you’re going to trip over said curtain and smack your face on the window. Either way, embarrassment ensues. This old fashioned practice is what Facebook is for me now, observing any old thing that happens in a person’s life. I’m guilty of it too. I’m watching that Harry Potter film again, for the millionth time. I took a test and, according to someone I don’t know, if I was going to be any Roald Dahl character I’d be Matilda (I was actually pretty happy with that), here’s 5000 pictures I took while on holiday, or the classic ‘If you don’t post this as your status…’ posts. Come on people, the world isn’t going to end and Facebook doesn’t want your identity. You’re not important enough. On Instagram, it takes a little bit more effort to post. Choosing the right photo, the right filter (if you decide to use one), choosing the right hashtags. You are viewing the specially selected moments of someone’s life, a twinkle of their life captured in one picture. The picture that most represented that time, that day, that feeling, that experience. Quite often what you are seeing is shared by someone you don’t even know. That’s so much more interesting to me than the everyday going’s on of your neighbours. Anyway, I don’t have neighbours anymore, so what’s a girl to do with her time.

“Wake up and smell the inspiration”

I refer back to the points about groups with this reason. Instagram is an awesome source of inspiration if you are interested in a particular thing. This wonderful social media platform is not only image centric but creativity centric. There are countless photos of food, books, fitspiration, quotes, tech and craft projects to keep your juices flowing. What I really like are the accounts that are dedicated to one particular topic, meaning you can follow people that only post gorgeous pictures of your favourite obsession, whatever it might be and even encourage you to try something new. I get a lot of ‘Instagram envy’ during the time I spend in the world of endless photos, as some people really do have a good eye for what photos, colours, quotes etc go together to form a beautiful feed of scrolling heaven. I have been inspired to better my posts, to put more thought into what I post and what is in the picture. For example, I love book posts, I follow a large amount of accounts that are dedicated to fantastically arranged book photos. So, I took it upon myself to try it out. I perfectly arranged a photo of the new Harry Potter play, my favourite teacup, saucer and side plate (complete with chocolate brownie) set and my arm wearing my beloved Harry Potter bracelet, all atop my wooden dining table. I was very impressed with myself and to date it is still one of my most popular posts. Whatever your obsession, Instagram = Inspiration.

Pet accounts are awesome. They are going to take over the world. They are better than YouTube videos. They have more followers than the average person. I even opened an account dedicated to my own dogs. They’re awesome check them out at @simbarogue.

If you enjoyed my rambling and would like to join me on my never ending quest for the perfect Instagram post you can find me at @theonyxraven. 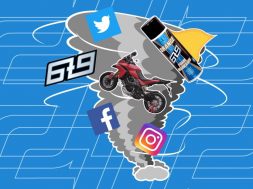 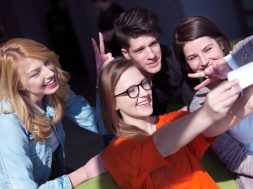